They are here! On May 7, 2015 Shiloh gave birth to 2 male and 5 female puppies. All have good ridges so far, no kinked tails, ridges will be rechecked in a few weeks to see if there are any extra crowns. Shiloh started having indications of labor starting the day before when of course tornados were blowing through the area in central Oklahoma. Elaine, Mark, Trouble, her 9 pups, Shiloh, 4 other dogs and a cat ended up in the newly built safe room at the Hudson house. The tornados passed through and everyone returned to the main house. At about 2am Shiloh began getting restless. Luckily she gave birth before the next set of storms came through late that afternoon. These sweet bundles will be watched 24/7 for the next week, dew claws will be removed and weights will be done to see how the pups are progressing. This is Trooper's first litter on the ground as we call it, can't wait to see these pups in person. As the puppies grow and start showing their personalities that is when a good breeder begins to match a pup with the best home to suit both.


On June 4th, our Shiloh x Trooper litter will be 4 weeks old. They have already been started on goat's milk and will progress to cooked beef then eventually to soaked kibble. They are getting better walking on their feet and now their personalities will be coming out! Temperment will be assessed constantly by Elaine and Mark. Many people have done puppy visits to see this litter and the litter that is 2 weeks older, socialization is very important from the get go in a puppy's development and it continues till way after the puppy goes to it's new home. 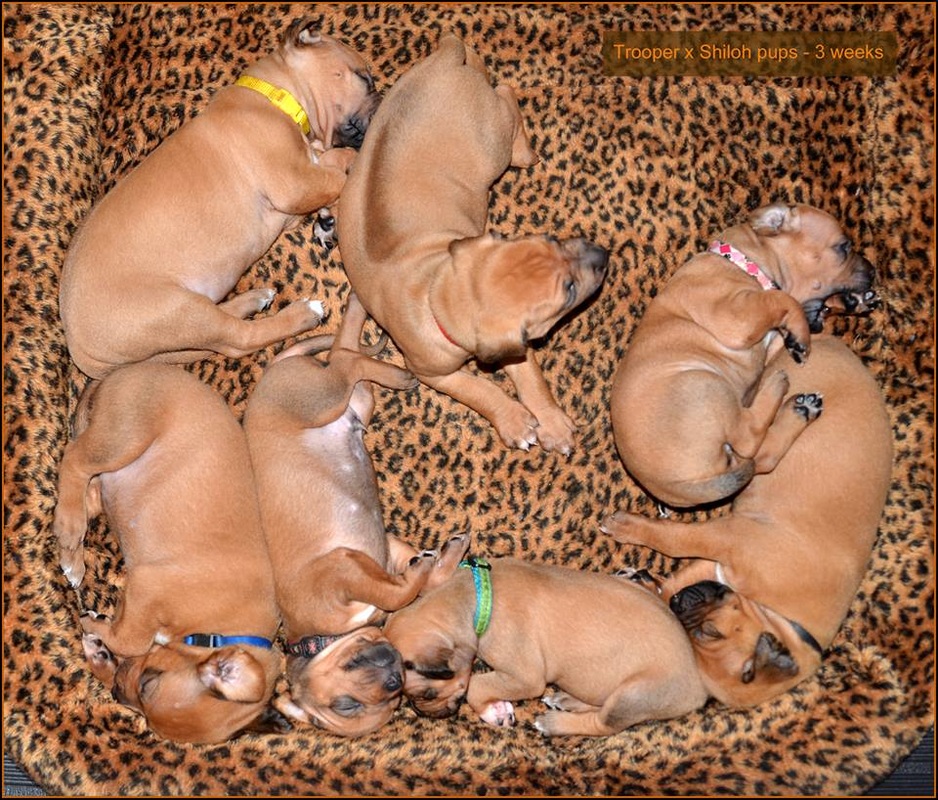 In June I took Rebel and Titan to Filer for a 2 day show. On Tuesday Rebel took Reserve which was close to getting the points. Wednesday we didn't fair as well, 4th, but Rebel showed beautifully, he just wasn't what that day's judge liked. The exciting news was my obedience dog, Titan, won his last leg to get his Graduate Novice title. It takes 3 separate trials w/ at least 2 different judges to get an obedience title. You also have to get a qualifying score. Titan got 1st place as well as his new title, and he is 7.5 years old! It was pretty hot out even in the am, no air conditioning in the fair building but he passed each exercise like a champ. The judge was impressed as he cleared a 26 inch high jump as well as a 52 inch broad jump. It was so cool to have our obedience instructor there to see the win/new title...she had tears in her eyes. Titan is the only ridgeback out of Cynara Ridgebacks and Intrigue Ridgebacks (where his stud dog is from) to achieve this high of an obedience title. We have already started working on his Open Dog title ( which requires even more obedience skills) but now we have the summer to perfect his and my performance before the Boise Shows in October. I am so proud of this amazing dog, if he is working with mom he is happy to do just about anything.
Powered by