On April 12th and 13th I competed with both Trooper and Rebel at the United Kennel Club shows down in Salt Lake, Utah. There are 2 shows scheduled for each day, the 2nd show of the day runs about an hour behind the first. Going into the shows Trooper had 80 points and 2 competition wins, Rebel 55 points and 1 competition win. To achieve Champion status your dog has to have 100 points minimum and 3 competition wins. A competition win is when your dog beats another dog for either Best of Breed or places high enough in the Group competition where another dog is in a placement behind your dog. Trooper finished easily during the first show, but I showed him with Rebel in the 2nd show hoping Rebel would place over Trooper. I even had a stranger/dog owner show Trooper so Rebel would look good, but alas, Trooper won over Rebel and went on to compete in both Best in Show competition (only 2 dogs competed in both Best in Show competitions)!
On Sunday I made the decision to only show Rebel. There were a few more hound breeds showing Sunday and I hoped to atleast get a 2nd place in the Group which would give Rebel his competition win by placing ahead of 2 other dogs. Well, Rebel showed beautifully and placed 2nd in the Group competition for both shows. Rebel is now a United Kennel Club Champion as well! It is extremely hard on dogs to be in and out of crates all day, doing 2 shows each day, but my boys gave their all. We received wonderful compliments from other breeder/handlers showing each day. Trooper will be the first Cynara ridgeback to achieve his UKC Championship, and Rebel, the first UKC Championship for Rufaro Ridgebacks.  The official point count is Trooper-130 points and 4 competition wins, Rebel-125 points and 3 competition wins. The photo above are of Trooper and Rebel, they were taken by the irrepressible Steven Moore, professional photographer to the dogs.

At the beginning of May, the Leadership Board at Boise High School put out an email to therapy dog teams in the Boise area. They were asking for teams to sign up for early am visits  over a 2 week period to help students destress from their AP finals. Titan and I were more then happy to help out...and what a great time we had. The first week we must have had 80 students come into the library within the 45 minutes before the tests started. Titan got a lot of attention and gave a lot of nuzzles and tail wags to those who needed it. The second week went just as well, students were saying that the therapy dog teams were 'the best idea Leadership has had.' Many students also commented on how just stroking all the therapy dogs made them feel more relaxed. Today on May 21st Titan and I got this email and picture from the Leadership Board. " All of us at the Boise High School Student Council thank you for volunteering with your therapy dog to help relieve AP exam stress! The students who attended loved the event which will become a new tradition at Boise High." I am so proud of Titan and his ability to help others! 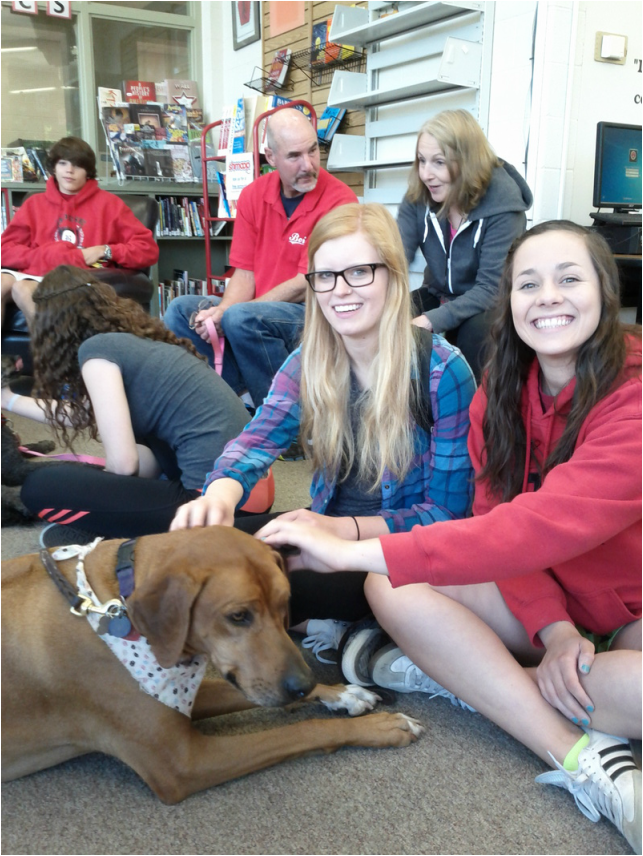 Mid May Trooper, Rebel and I headed down to the Logan, Utah shows. Beginning of the trip was uneventful. but Saturday, the first day of the show I came down with the Norovirus and was very sick as well as dehydrated and dizzy. The judge kept asking me if I was ok, I told him I had paid my money, driven the distance and was going to show. So in 90 degrees and what seemed like 100% humidity we showed. Rebel got 2nd place in the Open Dog Class, nothing for Trooper. But Sunday Trooper got a 5 point major towards his Grand Championship by getting Select Dog. Trooper now has 18 points and 2 majors under his belt, 7 points and 1 major to go.