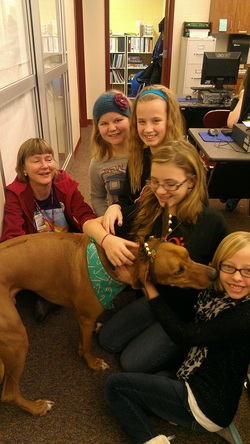 On November 9th I was asked to bring one of my therapy dogs to a Kuna elementary school that had  an 11 year old boy killed and 4 kids injured in a school bus crash the week before.  His classmates were having difficulty dealing with the loss. I took Titan and joined the other teams that volunteered to visit. We each got assigned a classroom to be in for the morning. Titan was the biggest hit, first off, he was the biggest dog there, and secondly, he is just the sweetest soul with the softest eyes that are so wise. He recognized right off the bat which kids were having the hardest time coping. Titan would just go up to them and put his head on their arm or leg, within 15 minutes these kids and their peers were all over him with pets and kisses. In their computer class we would go up and down the isles where he would nuzzle the kids, but when I put Titan in a down/stay at the edge of the classroom, the kids would get out of their chairs and gravitate towards this big red dog. One student put her reindeer headband on Titan and he loved it. A teacher saw this picture and said it was so nice to see her girls smiling again.  We couldn't go to the school Tuesday, but the news was out and both TV and newspaper representatives were there. A friend who organized the visits let the media know how important these dogs were in helping people cope with issues both emotional and physical. Not every dog can do therapy work, that is why I make sure to get my dogs from a reputable breeder who makes temperment of their dogs a priority. The positive feedback from our visit to the school has been tremendous! This has made me have a more enjoyable week.  My dogs make me feel good, so I do therapy dog work so my dogs can make others feel special.

Received a surprise in the mail, a certificate from the UKC stating that Trooper (Cynara's Bounty of the Black Pearl) is officially the #4 Rhodesian Ridgeback in the US! We also received a formal invitation to the UKC Final 10 Competition in Kalamazoo, Michigan this June. We won't be able to attend due to the fact I will be showing both Trooper and Rebel in other shows that week, but what an honor.
Trailhead Ridgebacks
Debbie Bonsteel, Boise, Idaho, USA- dlbonsteel@gmail.com
Powered by